This week, Rosendale’s cricketing girls and boys gathered within a stone’s throw of The Oval at Kennington Park to take part in Lambeth SSP’s Quick Cricket Competition. On Monday, the Year 5 boys played 3, winning two and narrowly losing 1. On Wednesday, the Year 6 boys followed suit with two victories, losing their third match by only 7 runs. Well done to Ryo who smashed 4 6s in total.

However, the performance of the week came from the Year 6 girls on Tuesday. Winning all three of their group games, they then defeated Vauxhall Wyvil to finish an excellent 3rd out of 11 teams competing. Special mention to Georgie and Anya who posted superb performances and Anya’s reverse sweep shots were specially singled out by Surrey CC coach Bernard Thys. Well done girls. 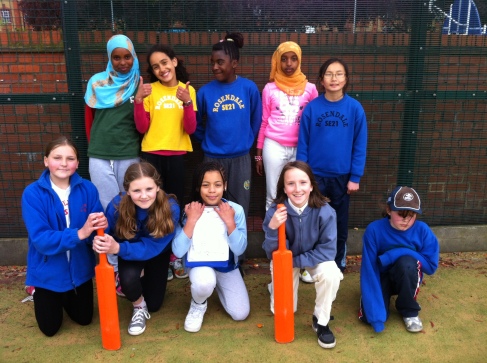